As I passed the boardwalk today (near the bench) I noticed a young bird spreadeagled on the boards. To be more accurate, I think it was spreadchiffchaff, as that is what I deduced it was from its rather scruffy plumage, and I think a fairly newly fledged example at that. 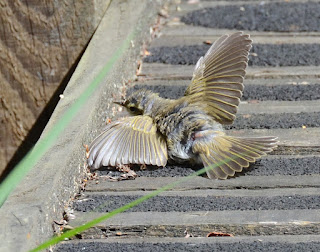 At first I thought it was just sunning itself as I have often seen birds lying on the ground or a flat surface with their wings spread out on hot sunny days. Then I noticed it looked particularly bedraggled and thought it may have been attacked, injured or even dying. As if to prove me wrong the little fella,who must have spotted me, jumped up, hopped onto the side of the boardwalk, uttered a fairly tuneless tweet and then fluttered up into the bushes. 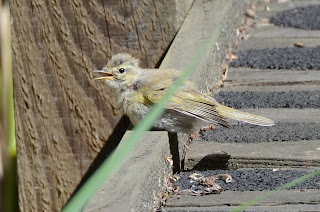 Having now studied the photos I took at the time, I have come to the conclusion that the poor little thing looked quite wet and I am wondering if its early excursions into flight may have resulted in ditching in the briney (well one of the small ponds), from which it has managed to flutter out and was in fact drying itself in the sunshine. Anyway good luck to the little chap and he had better not try repeating the feat when he heads south in a month or so.

Talking of boardwalk encounters, my habit of trying to walk as quietly as I can when I approach junctions or corners on the reserve and listening for animal activity at every opportunity paid dividends yesterday when I was able to walk up on this male Muntjac. 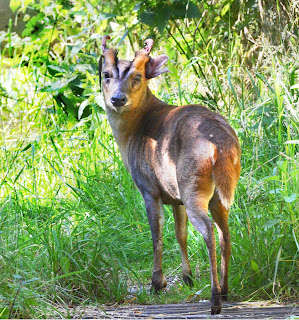 Not perhaps the closest encounter I have had, but a good photo opportunity nonetheless.
Posted by FoHESC at 13:14 2 comments:

Email ThisBlogThis!Share to TwitterShare to FacebookShare to Pinterest
Labels: Muntjac

With one thing and another, it's probably three weeks since I last visited the reserve. Time enough for Nature to paint a different canvas, presumably using watercolours. The growth on the butterfly bank has been phenomenal and towards the northern end seems to consist mainly of Yellow Vetchling. However, about halway along, a single Corn Cockle flower was spotted, pointing its purple bloom skywards in defiance of all other vegetation. Through the Comfrey Triangle, Azure Damselflies flitted between grass stems and the occasional Blackcap could be heard. We arrived at the Far Hide in time to see a face off between two pairs of Great Crested Grebes. The victors, obviously buoyed by their success, then saw off a Coot. A Reed Bunting flitted past with a faecal sac in its beak, whilst, in the distance, a large bird heading north with a strong flapping motion of its wristy wings may have been an Osprey. Too far away to be sure. Retracing our steps to the Near Hide, I was struck by the Hendrix-ification of the bund, the Loosestrife flowers creating a purple haze, shimmering above the other vegetation. Several Reed Warblers hopped through the undergrowth immediately in front of the hide and a few Lapwing twisted and turned above the water. Twenty or so Common Terns were swooping over the lake, some of them juveniles with a white forehead. Swifts, too, were busy feeding on the countless flies dancing over the water surface. As we returned to the car park, the skies lightened as the sun put in an appearance. The butterfly bank resumed its eponymous function as we identified Ringlet, Small Skipper and Gatekeeper. It's great to go on holiday, but it's also good to be back.
Posted by Imperfect and Tense at 09:27 No comments: