Warbler Walks (and much more)

This year we were fortunate to have two walks led by Andy Harding, the County Bird Recorder. Not surprisingly, the evening walk in pleasantly warm sunshine on 20 May was well attended.

Within a few minutes we had swifts screaming over the reed bed at the back of the Centre. Andy told us that a swift never comes down to land until it is ready to nest and breed, at some two or three years of age. This means that it even sleeps on the wing, going up high and catnapping on the way down. They spend a lot of time over the sea, where they can float in the warmer and rising air currents. 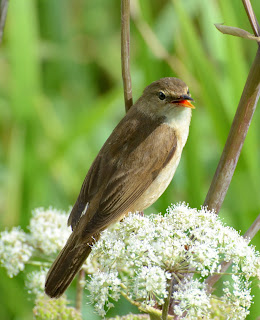 We ambled past chiffchaffs, willow warblers, garden warblers, blackcaps and whitethroats. A sedge warbler and a Cetti’s warbler were making the most noise at the water’s edge. Not everyone got to grips with the differences but I’m sure everyone learnt something. 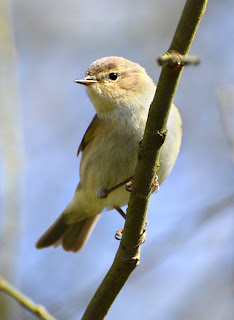 The highlight for the lucky few at the head of the group was the sight of two young foxes playing along the path past the Far Hide. Though of course they jumped into the hedge as soon as they saw us.

Finally as we were enjoying a cuppa back at the Centre, we had a grandstand view of a barn owl flapping slowly around the edge of the lake.

The early morning walk on 31 May only attracted a dozen or so hardy souls – well, it was dull and damp and more like April than the end of May.

But what a treat we had. Apart from the birds, we came across Gordon Redford checking his moth traps which he does every morning in the summer. He found two hawk-moths that had been attracted to the lights and brought them to show us: a privet hawk-moth (the larvae feed on ash leaves as well as privet) and an eyed hawk-moth. The privet’s wingspan was the length of a finger and the eyed hawk-moth was nearly as big. We were amazed to hear they only live a few days and don’t have the mouthparts to feed on anything. Their whole existence is geared to finding a mate and reproducing. 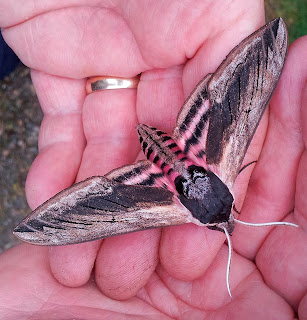 Then we concentrated more on the birds. A cuckoo was calling some distance away. Cetti’s warbler nearly broke our eardrums, and garden warblers and blackcaps sang together from neighbouring bushes so it was easier to tell the difference – garden warblers go on and on melodically but monotonously whereas blackcaps sing out in shorter and more flourishing bursts. Reed warblers were another bird that are more repetitive than the scratchier sedge warbler, which can be found further away from the reeds and in the bushes. Song thrushes gave us plenty of experience of repetitive phrasing in the damp atmosphere. 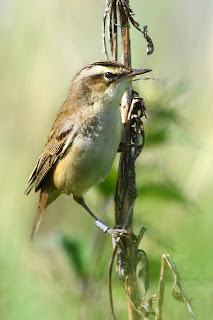 A heavy shower sent us into the Near Hide but on the way we disturbed a kingfisher and two muntjac deer. I had noticed some fresh droppings on the path so it wasn’t surprising. We all managed to fit into the hide and had good views through the telescopes of a smart male garganey, a pair of gadwall, shoveller, ducklings and goslings.

We just got to the Far Hide in time to shelter from another shower. Andy showed us how to tell a common tern from an arctic tern by looking for a darker wedge at the outer primaries in flight: the arctic tern would have uniformly pale wings. This difference was only noted in the 1960s (I suppose when telescopes and telephoto lenses became more available), and before then people always used to refer to “commic” terns in flight because they couldn’t distinguish them. 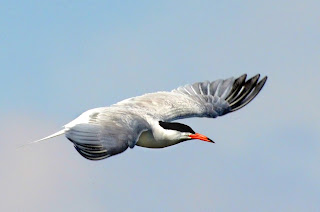 We saw a fox snooping around on the bund and had a discussion about the feasibility, or indeed the ethics, of whether this could be prevented in order to save the eggs and chicks of the ground-nesting birds on the bund. Clouds of hirundines came over feasting on the recently emerged flies rising from the water surface. We tried to see how many of the herons, cormorants and little egrets were still nesting on the island.

By then we were ready for a hot drink and home-made cake in the Centre.
Pauline Studman informed us that the total number of bird species seen on this walk was 45. An excellent result.

Thanks to Andy for his informative chats and to Tony Bedford for his puns.


Photographs by and copyright Tony Bedford
Posted by FoHESC at 12:53 No comments: