All Things Bright and Beautiful.....


Or Ladies Day at HESC


It has to be said that, although the songs from a myriad of warblers, continue to ring out around the reserve, apart from the occasional bird perched on a reed or bush, generally the birders at HESC may have a thin time of it for a month or so. Particularly in respect of the main lake which is now very bare of birds. 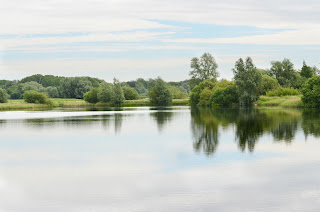 The excessive rain since April has, as you will know, caused the water levels to rise quite dramatically at times and this seems to have taken its toll on many of the margin nesting birds eggs and offspring. Young Moorhen, Coot and Grebe are all conspicuous by their absence. Both pairs of Oystercatchers and Lapwings, that appeared to be getting down to the business of starting new families in April, look like they gave the idea up as a bad job.


Undeterred, by the lack of birds and keen to make the best of the few warm (even hot) sunny days this week and with the aim of broadening my knowledge and identification skills in both butterflies and odonata, I have, once again, been tootling around the reserve with the camera. 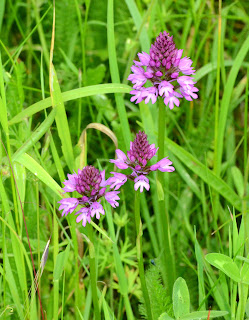 I had been advised of the location and given permission to photograph the tiny, but stunning, Pyramidal Orchid, which I think, has made a solitary appearance this year, and on the edge of the pathways, found and snapped some Bee Orchids, which are also out in small numbers. 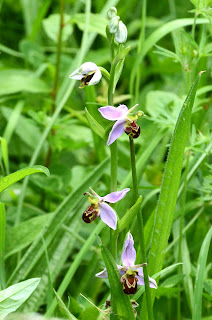 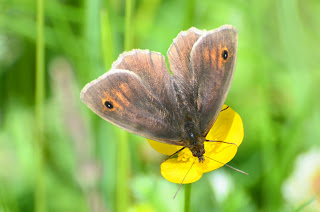 and then perched amongst the grass was this pretty what I thought was an Essex Skipper (also female – no black line on wing), but have since been advised is a Large Skipper . 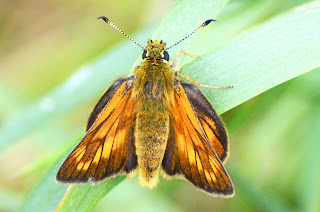 The dragonflies are also becoming more numerous and in fact the Four-spotted Chasers are positively plentiful at the moment. 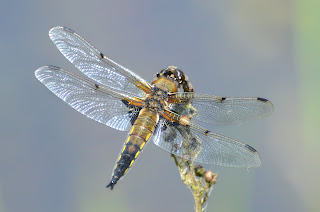 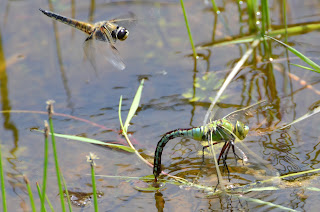 and encountered a couple of, you guessed it, female Black-tailed Skimmers clinging to the grass. 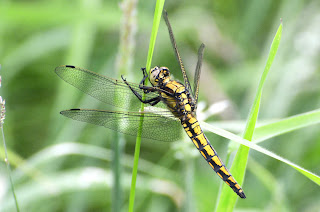 All in all a lot of fun and it just proves what a great spot HESC can be for some colourful wildlife, even when the birds are on their summer holidays.

All photograhps taken by and © Tony Bedford
Posted by FoHESC at 05:23 5 comments:

Click on Events Tab for more details
Posted by FoHESC at 06:21 No comments:

I found an hour earlier today to walk around the Reserve.
After yesterday's rain there were fewer mosquitoes to bat away along my chosen route than I'd expected to encounter; maybe they'd already feasted on the baby mink which were out to play, and the muntjac that startled and ran when I disturbed it by the side of the woodland hide.
Smaller birds were invisible but in great voice - I caught myself naming them out loud and sometimes disagreeing. That's definitely a sign that Me, Myself and I were relaxed enough to talk to each other; there hasn't been much time recently to do that, which was one of the reasons for my visit.
This week my head's been filled with Big Ideas about a new writing project which has shut out the kind of normal conversation 'we' usually find time for - you know, all that moment by moment decision making which has to be made, discussed and argued about before even the most inconsequential action can take place. (Oh, you say you don't know...?  It must be just 'us', then!)

We also had an internal conversation about whether or not the noise of the Red Arrows flying over the Reserve this afternoon really was as LOUD as it seemed....it was shockingly LOUD, building to a thundering roar as the planes passed overhead. It actually scared me, something which doesn't happen often. Magpies and blackbirds came out from the woods in a frenzy of flapping, and canada geese on the lake started honking quite wildly.

And when they suddenly started up again, I realised that the smaller birds must have stopped singing for those few moments....

With the returning peace, I saw a pair of hairy dragonflies going through their courtship routine among some long grasses, watched a reed bunting reciting his mantra over and over in a hawthorn bush, and glimpsed a grass snake slithering away into the undergrowth a litle distance away from the Quiet Please sign.

Time to take some pictures, we decided. 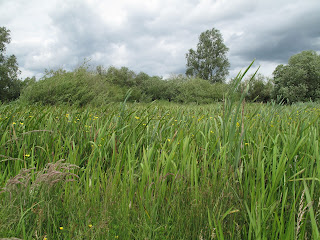 Greater Spearwort in the dipping pond, a cardinal beetle on a burdock leaf.... 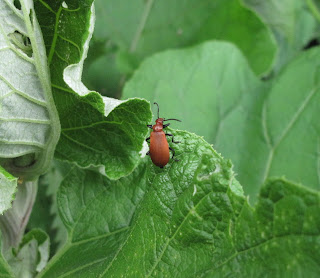 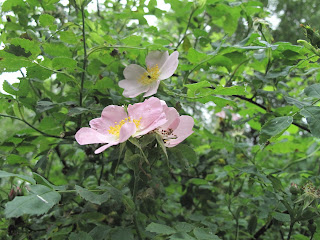 Major Cover Up at HESC


What is this I hear you cry? Do we have financial irregularities to make the Euro issues look like a petty cash miscount? Or, better still, is it salacious gossip involving improper relationships?


Well the problem does relate to some particularly tenacious and not all together well behaved young ladies, who are not in the least fussy, if its men or women, with whom they enjoy a brief, but close and ultimately painful, relationship.


Yes, the HESC Mozzies are out in force and getting their teeth stuck into anyone who leaves exposed flesh available. Most perilous areas at the moment seem to be along the pathway between the woodland and far hides, but you are liable to be mugged almost anywhere on the reserve.


Although the majority of mosquitos in this country do not bite humans, a number of species are more than willing to have a go including: Culex pipiens (biotype molestus) which can be a nuisance biter in localised areas, where it mainly breeds  underground. Other species partial to a drop of vin du permit holder, include:  the woodland mosquito ( Ochlerotatus cantans), and Culiseta annulata which may be found  in urban areas, early and late in the year.


In all cases it is only the female that bites.


The answer?  Well you  take your choice, having had a number of itchy, swelling lumps on my arms neck and face, I recommend long sleeves, definitely do not wear shorts and maybe try one of the proprietary insect repellents. My old and very effective standby, for keeping the Highland Midge at bay, Avon Skin So Soft, does not appear to keep the HESC Buzzing Belles from performing transfusions, on me at least.


British “mozzies” do not carry malaria, or at the moment, any other serious diseases,  but, if you want to avoid some irritating and unpleasant sore lumps on your personage, please take care and try to cover up as far as possible.
Posted by FoHESC at 06:57 2 comments:

Defence , A Fence and the Way Forward

Sunday’s work party went deep under cover (the grass is now at least a metre high in parts of the reserve) to try and deter the unwanted visitors who have been entering the site at the far eastern boundary, where the HESC property borders the fishing club land and the farmland to its north. 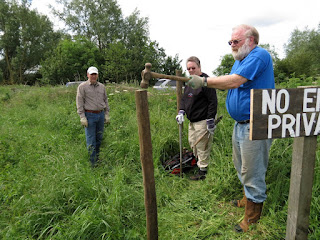 Some of the Team in Action

For once the weather was kind and soon fence post were hammered in and new signs erected – but knowing how these have been previously ignored – a more tangible barrier was formed from scrub and brambles. Very shortly we will also be stretching barbed wire between the newly planted posts to reinforce the message. 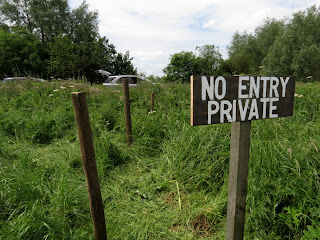 It was not all hard work of course and there were plenty of opportunities to stop and admire the Banded Demoiselle Damselflies take their partners for the mating dance above the nearby stream, whilst Dragonflies hunted over the tall grass. 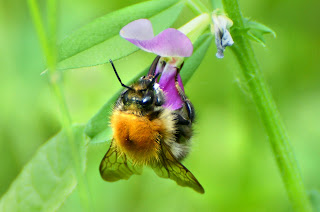 One of Sundays other Workers


We understand that the measures we have taken and will continue to take, can never stop people who are absolutely determined to enter the nature reserve. But, by making it much more awkward to enter via the perimeter fences, gates, etc, we hope to greatly reduce the possibility of further vandalism to hides and other property.  Not to mention the potential for personal risk from those with bad intent wandering around the reserve. 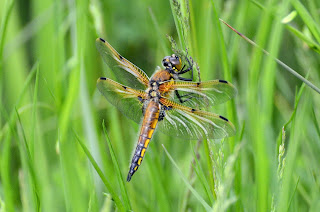 
On a more positive note, it is fantastic to report that we now have over fifty people who have expressed an interest in getting involved with the Friends Group. It would be brilliant to see a few more of you at our monthly Sunday work parties. Please don’t feel shy, we are very friendly bunch and you need no special skills or high levels of fitness. There are always plenty of easy jobs that you can do to help and being part of the Friends team may often take you to parts of the reserve that you may otherwise not see. It is also a great opportunity to see and learn about the huge variety of wildlife that lives on or visits the reserve.


We would also very much like to learn what you would like to get out of your HESC membership and the Friends Group. Very shortly we will, therefore, be sending to everyone who has provided us with their e mail address, a short questionnaire so that we can understand your particular interests and reasons for joining the Friends Group. Please, please, do take a few minutes to fill it in and send back to us, that way, we can better plan for future activities and how you would like to see the Friends Group develop.
Posted by FoHESC at 03:38 No comments: