The Common Terns seem to have had a successful breeding year at LLNR and a number of juvenile birds can be seen begging food from the adults.
I recently took this picture which suggests that both parent birds had caught fish and appeared to be queuing up Heathrow style to feed junior. 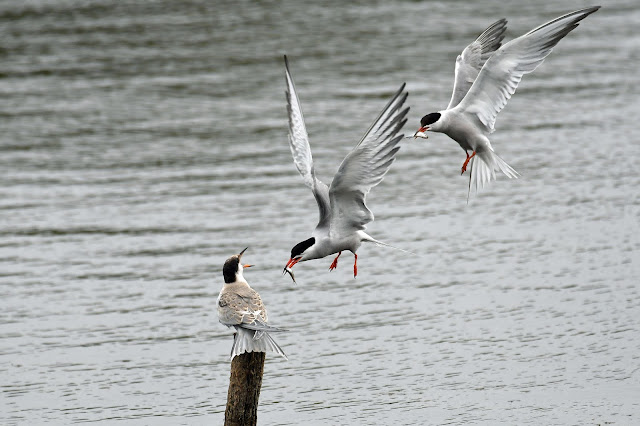 In actual fact the first adult Tern offered the fish to the youngster then veered off to feed another, leaving the second adult to feed the confused juvenile. I can only assume a case of mistaken identity. 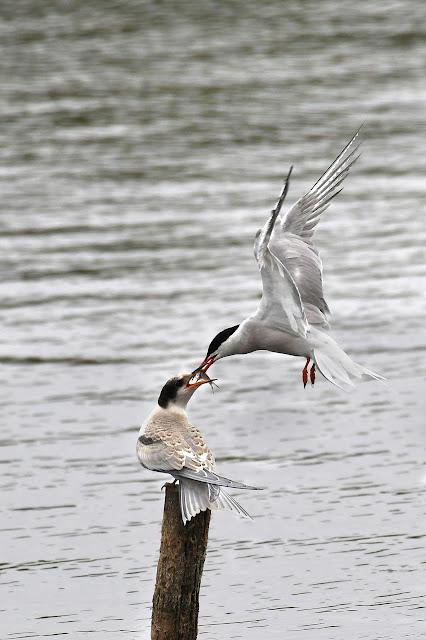 Above, the young Tern finally gets a feed.
Article by Tony Bedford
Photos copyright Tony Bedford.
Posted by FoHESC at 15:33 No comments: 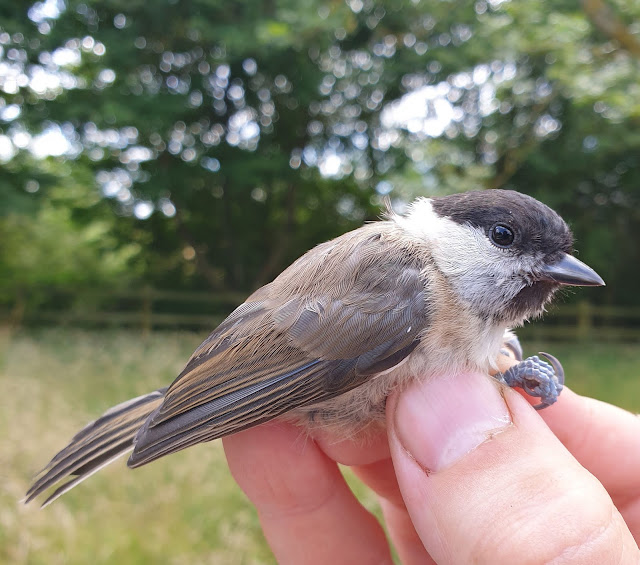 The first Marsh Tit to be recorded on the site in the last 5 years was ringed by Kenny Cramer and his team last Sunday. Lets keep our fingers crossed that this is the start of a return of this scarce species. 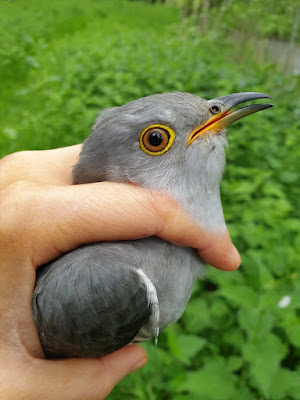 Those of you who have been following the ringing stats for LLNR for a while will know that in 2017, an impressive 5 cuckoos were ringed at LLNR which accounted for around 10% of all the fully grown cuckoos ringed in the UK that year.

Since then, despite Kenny's best efforts, we have spectacularly failed to catch another one... until now...A handsome juvenile male stayed in the net long enough to be extracted and processed, ending the long running streak of bad luck.

At least 3 individuals were present (probably more) and so the cuckoo quest continues...

Following a not too successful inaugural year for the new Sand Martin Nest Bank - we did get some harvest mice in a few nest chambers - a group of FoLLNR volunteers have just carried out some improvements for the 2020 season. 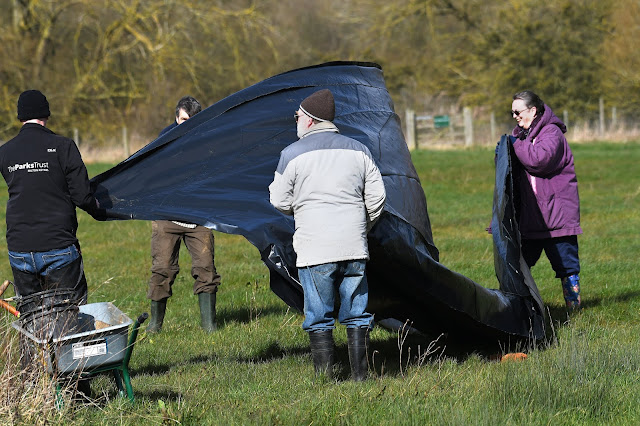 A waterproof membrane has been fitted across the roof and to create a more natural finish turf has been laid on top to help the "Sandbank" blend into the surroundings. 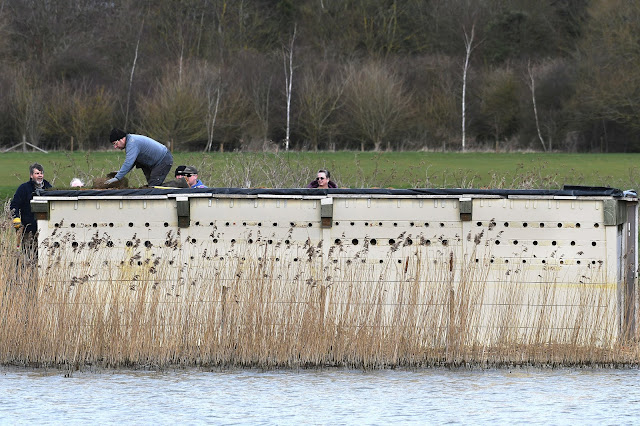 Some of he reeds in front of the nest bank have also been trimmed to ease access by our feathered friends. A little more trimming may take place when water levels have dropped although we intend to leave some reeds to keep things as natural as possible. 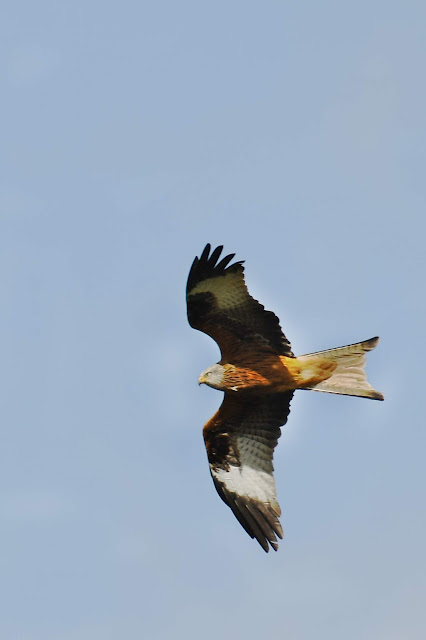 And whilst all the work was going on we had an overhead observer keeping an eye on proceedings
Posted by FoHESC at 08:57 No comments:

First of all, let me wish you all a very Happy New Year, I hope 2020 brings you good health, happiness and plenty of everything else you wish for!

2019 has been another amazing year for ringing at Linford Lakes Nature Reserve and our other sites in Milton Keynes. I will attempt to summarise a few of the highlights.

2019 did however turn out to be our most diverse in terms of species. We encountered 44 species which beat the previous record of 38 set in 2019. This included 10 species which were new ringing records for the site consisting of Barn Owl, Carrion Crow (caught in a potter trap), Common Tern, Grasshopper Warbler, Kestrel (ringed in the nest), Lesser Whitethroat, Mistle Thrush, Common Snipe, Sparrowhawk and Starling.

It turned out to be a very good year for warblers with record numbers of Chiffchaff, Willow Warbler, Reed Warbler, Sedge Warbler, Garden Warbler and Whitethroat ringed as well as the aforementioned Grasshopper Warbler and Lesser Whitethroat. This could be attributed to the density of the vegetation on the bund which seemed to be very attractive, particularly to migrating birds, and allowed for the cutting of some extremely effective net rides resulting in some very large catches.

Long tailed tits also appeared to have had a very successful breeding season with 68 birds newly ringed which is almost double the previous record of 35 back in 2015. 28 new reed buntings was another record beating the 21 ringed in 2018 while a new tawny owl in November was only the second to be ringed at Linford. 2 new green woodpeckers were the first to be ringed at Linford since 2016 and Goldcrest numbers bounced back to 22 after dipping to just 12 in 2018.

On a less positive note, blackbird numbers were down with just 12 new birds ringed, the lowest total since 2015 although this is likely to have been impacted by the mild winter and reduced ringing in December resulting in fewer winter visitors being caught. 4 new bullfinches was our lowest ever total for Linford. No coal tits were ringed in 2019, and despite several targetted attempts, we once again failed to ring any cuckoos although several individuals were present on site. A single siskin and no redpolls were ringed in 2019 again, partly due to mild weather and reduced ringing opportunities.

The completion of the Sand Martin bank in early spring was a significant achievement. No sand martins nested there in 2019 which was perhaps to be expected, (just a single pair nested in the old bank), however several harvest mice did find it to their liking! Now that the structure has had a year to 'naturalise', we can hopefully look forward to a successful breeding season in 2020. 3 new potter traps were deployed towards the end of the year which produced 2 new water rails (and a somewhat unexpected robin!) Several new nest boxes for tawny owl, little owl and kestel were deployed at Linford and several other locations around MK. Although no breeding was recorded in 2019, a barn owl was seen to be roosting in one of the kestrel boxes. 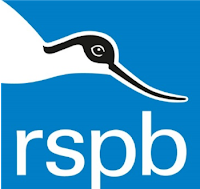 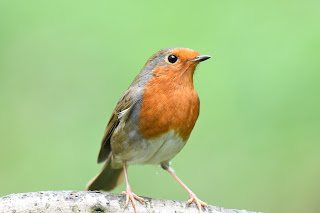 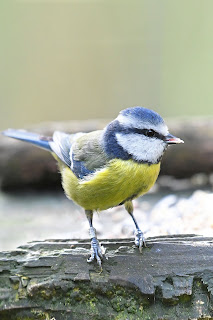 Viewing positions from inside and outside the Centre

Guides to help with Identification

Refreshments available
Posted by FoHESC at 06:59 No comments: 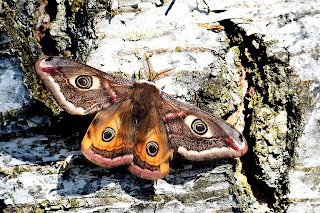 At Linford Lakes, a Robinson moth trap has been in use since 2017 to capture and record the numbers and different moth species present on the Nature Reserve - all the moths caught are released unharmed. In 2018, the trap was only used for the latter part of the season.
The table below of monthly records for May, June and July in 2017 and 2019 shows that both numbers of species and total numbers of moths in 2019 to be considerably lower.

However, despite the lower numbers of 2019, 20 moths previously unrecorded at LLNR (9 Macro and 11 Micro)  have been added to the Linford Lakes list.

Photo courtesy of Tony Bedford
Posted by FoHESC at 01:28 No comments: