I am delighted to inform you that the appeal against the refusal of planning permission at Linford Lakes has failed and the appeal has been rejected.

I have copied the Planning Inspectors summary below - but in short he has found that although MKC have failed to demonstrate a 5 year housing supply - in this case the considerations of Landscape and Ecology (Biodiversity) outweigh the NPPFs presumption in favour of development.

I believe this decision has been significantly influenced by the evidence and submissions of those who attended the enquiry and spoke against the appeal and all those who wrote in to oppose the appeal on grounds of ecology.

It is a tremendous validation of the power of persuasion by people who truly deeply care about our environment and local resources.

I congratulate all of you why took the time and effort to get involved.

Compliance with the development plan

98. The Council has been unable to demonstrate a 5-year supply of land for housing, and the development plan is silent as to how this shortfall is to be made up. Consequently, even though none of the policies directly affecting the appeal site are concerned with housing, the ‘tilted balance’ in NPPF paragraph 14 is engaged.
Overall conclusion

102. Having regard to the requirements of section 38(6) of the 1990 Act, these other material considerations do not indicate a decision contrary to the development plan. I have taken account of all the other matters raised, but none changes this conclusion. The appeal therefore fails.

John Felgate
INSPECTOR
Posted by FoHESC at 06:38 No comments:

Kenny Cramer our regular BTO Bird Ringer and his team were at LLNR today. Their results
reflected the changing seasons with a mix of departing and arriving migrants.
Highlights included 6 redwing, 4 chiffchaffs, and 3 meadow pipits (a species that has
proven tricky to catch in previous years.)
2 song thrush, a bullfinch, a treecreeper and a reed bunting were all less commonly handled
birds which added to the nice variety.
Overall they caught 29 birds of 13 species, 21 of which were newly ringed.
Other birds spotted included red kite, buzzard, sparrowhawk, the great white egret,
25 fieldfare and 12 meadow pipits (mostly perching on the nets.) 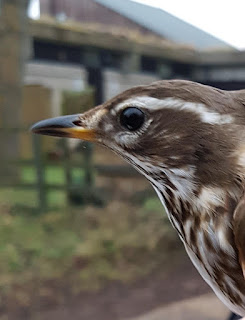 Results for the day: