And then there were three

Y'know, it was a coincidence that Mike Rutherford from Genesis was featured in the closing ceremony of London 2012, the 30th Olympiad. But more on that later...

Earlier in the day, a FoHESC work party had performed their version of a Greek-tragedy-cum-marathon (it's a tenuous Olympic link, and nowhere near a personal best). The morning's work was to move a load of rubble from where it had been deposited to a place of safety, in preparation for the building of a hibernaculum, as another habitat for animals to use.

Now, 'hibernaculum' may be derived from the Latin for 'winter residence', but the oppressive heat of the day, combined with the ferocious tenacity of the local mosquitoes, turned the project into something of a Sisyphean task. And no, I'm not taking it all too hard.

As foreshadowed in the title of this post, the trusty band of volunteers was thin in number, somewhere between 2 and 4, but only if the Japanese didn't protest the score. Many too many? No.

Tony, Alan and myself, armed with the obligatory squeaky-wheeled barrow, set about excavating the larger pieces of rubble from the pile and transferring them to... "Hang on," says Tone, "Why don't we just start building the hibernaculum now? Saves moving this stuff twice." And so a piece of bank (forever to be known as Tony Banks) was hastily selected, high enough above the water table to prevent winter flooding, and in a suitably sunny spot for the delectation of the reptilian and amphibian residents-to-be.

Several layers of bricks were laid out as a base, over an area of 1.5 x 2.5m. Then, the front and sides were built up as a low retaining wall. By this time, the javelin-jawed insects of the reserve were making their presence felt, as we succumbed to bites that were definitely in too deep. But we persevered with barrow load upon barrow load until a rest break was very much in order. I volunteered to make a brew, and though I had used the cold tap earlier, I was quite prepared to turn it on again. Following tea/coffee and biscuits (Abernethy shortbread - I know what I like), we returned to the fray. We now needed a selection of different diameters of pipe, to provide the means of entry to the hibernaculum and places within which to hide. There was a bit of a misunderstanding as we each appeared from the tool store with a different gauge of pipe and type of saw, but eventually we managed to correctly cut up sufficient for our needs. Every scrap was used, as we didn't want to be throwing it all away.

Back on site, the piping was carefully arranged, wedged in place and then covered with more layers of rubble and sand, which we hoped would keep it dark.

This was as far as we could go on the day, as the final step will be to roof the structure with sheets of corrugated iron (to keep out the rain and also provide a basking spot for any herps) and surround the structure with a few logs for added habitat interest. What with global warming, we may even see a scorpion using the hibernaculum, but as non-native invasive species go, that would be an illegal alien.

The original pile of rubble (courtesy of Barney and Betty), didn't look that much smaller than when we started. Methinks that Hibernaculum 2 may be on a much grander scale!

Our thanks must go to all the dragonflies and damselflies on the wing, for helping to combat the swarms of mosquitoes, and to Our Lass for providing a hearty picnic lunch for three tired but happy workers.
Posted by Imperfect and Tense at 14:40 3 comments:

Email ThisBlogThis!Share to TwitterShare to FacebookShare to Pinterest
Labels: Hibernaculum


We are delighted to report that last night the Friends Group hosted a combined Bat walk and Moth trapping evening which was attended by 34 people, of whom the many I spoke to, said they had enjoyed a thoroughly interesting and fun event.


The evening kicked off with a visual presentation by local moth expert Gordon Redford, who explained the life cycle of the moth and regaled us with his own experiences of raising moths in his back garden, before telling us about a few of his favourites, from the 2500 plus species that can be found in the UK.


Next armed with Bat detector boxes Alan Nelson led us out into the brightly moonlit night and we patrolled some of the paths near the lake and through the woods to try and see (and hear on the detectors) whatever bats were active on the reserve that evening. At first we blanked, but as our bat detectors became tuned to the correct frequencies and our eyes attuned to the darkness we encountered low flying Pipistrelles and even spotted (after picking up its distinctive sound on the detectors) a Noctule (Nyctalus noctula) - which is one of Britains largest bats. We also spent a little time in the near hide watching, as Alan illuminated the surface of the lake with a powerful torch beam, in the hope of spotting Daubenton's Bat, (Myotis daubentonii), which specialises in feeding over water. 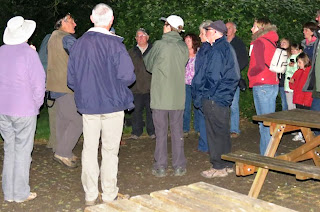 Bat Detectors at the ready - bravely they went into the night

Unfortunately, we spotted only one bat over the lake and so headed back to the centre, however, on the way we saw and picked up the echolocation ultrasound signals, of several more Pipistrelles, as they flicked over the paths and trees and occasionally our heads.
Please, please, please dear bats stay and munch up as many of our mozzies as you can. 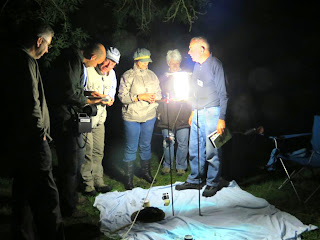 
On returning to the centre we found that Gordon had set up five moth traps for us to check out and whilst being hopeless at identifying (and remembering the names of) the dozens of species that were in and around the traps myself, I can tell you, that amongst them were Common Marbled Carpet, Common wainscot, July Highflyer and the amazingly named Uncertain. Perhaps one of the more unusual visitors to a trap was a Great diving beetle (Dytiscus marginalis). 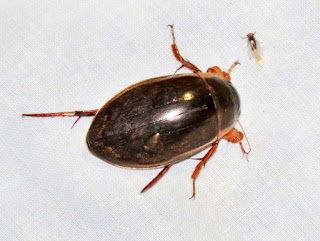 We will try and get a complete listing of all the species recorded on the evening from Gordon and publish it on this site shortly. 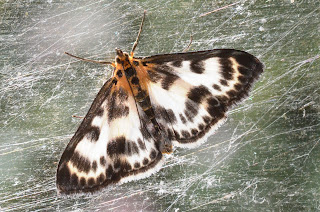 Small Magpie Moth photographed in the Near Hide

The evening concluded around 11.30pm at which point some of the younger visitors could be heard negotiating a lie-in for the following morning with mum and dad.
We would like to thank Gordon and Alan for their excellent inputs into the evening and hope to advise you shortly of future events, including our planned “Open Sundays”. In the meantime we hope you will continue to visit the reserve and enjoy it's wildlife and look forward to meeting with you all again soon.