The increased numbers of visitors to our Bat and Moth Night this year, perhaps reflects the dramatic increase in our membership, but also indicates just how popular these events are. 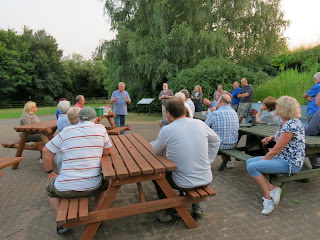 Some of our visitors listening to Gordon

Once again, our favourite Moth Man, Gordon Redford, kicked off proceedings with a very interesting and informative talk about the life cycle of the moth and his experiences in getting certain species to breed in his back garden. This year, however, Gordon had brought along samples of Moth eggs, pupae cases and some very active caterpillars. 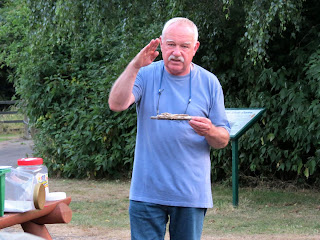 Gordon explains one of his exhibits

Following Gordon onto the stage came our new Bat expert Colin Savage - Colin works for the Parks Trust by day - but by night, he becomes a walking encyclopedia of Bat knowledge, with over 25 years experience of working with and studying British bats. Colin told us about the different species to be found in Britain and also gave as us an interesting insight into the lifestyle of the bat. 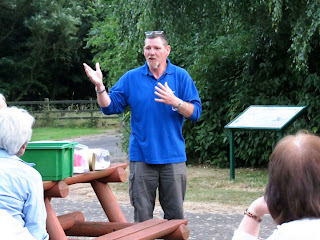 Both our speakers were incredibly well received and kept their audiences totally engrossed with a mixture of fascinating facts and amusing anecdotes.

Unlike last years damp Summer, this year the delightfully warm evening allowed for our visitors to sit outside for the presentations, which was just as well given the numbers of attendees.

As Colin closed his presentation the Bat Detector Boxes were handed out to our keen Bat seekers. Thanks to support from not only Colin, but also Carla Boswell from the North Bucks Bat Group, Martin Kincaid from the Parks Trust and Diane Evans from MK Council there were plenty of detectors to go around and our thirty plus group were well equipped, ready to go into the night. 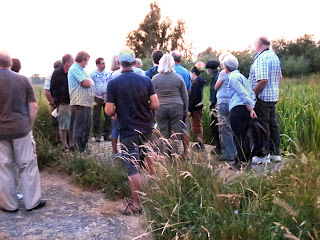 Checking out a Moth Trap before it gets dark

Our intrepid photographic team, have not yet been able to invest in infra-red equipment, so, I'm afraid that you will have to take my word for it, that we saw and heard many bats that evening. Mostly we encountered Common Pipistrelle, but, as last year, we also picked up on the calls of a few of Noctules as they whizzed overhead. 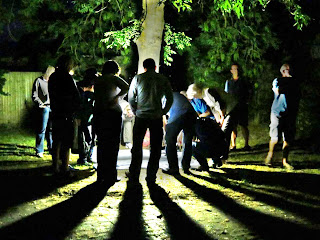 Back at the Centre Gordon's traps had attracted an eclectic variety of Moths including the strikingly beautiful Scarlet Tiger, the intricately patterned Peppered Moth, a couple of Swallow-tailed and some bright yellow Brimstones. 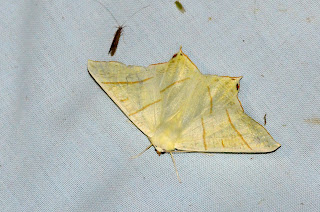 We also had one of Gordon's favourite moths the Drinker.

I don't know what it is but something about Gordon's and Drinker seems to have struck a chord in me? 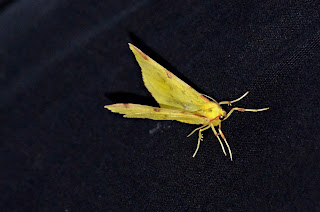 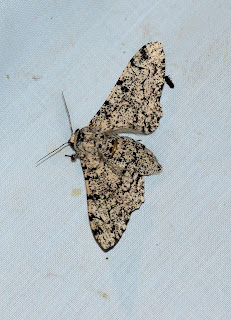 I have asked Gordon to forward me a list of his top finds on the night and will add it to our species list on this blog as soon as it arrives. 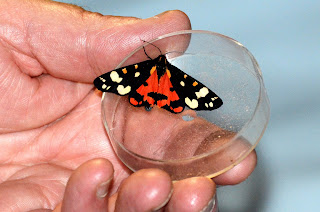 The evening finished around 11.30pm when just like the bats and moths, our happy visitors faded silently into the night.

As part of our campaign to bring the Hanson Centre to a wider audience in Milton Keynes, FoHESC decided to go out and find our public, by taking part in the Great Linford Eco-Festival.

Our pitch neighbours for the day were the Conservation Volunteers (MK Green Gym) - to who we owe a massive debt of thanks - not just for all the great work they do at HESC - not just for lending us a gazebo for the day - but most importantly showing us how to put it up (and all the little bits and pieces we borrowed).

The weather was clear blue sky as far as the eye could see and hot, hot, hot. 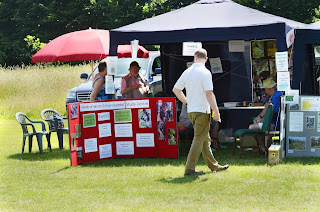 The day started slowly with just a few visitors taking an interest, but as the day went on our tent was definitely the place to "bee".

Soon, our stand was full of youngsters, completing colouring challenges and wildlife word puzzles. Our pond-life tank proved very popular and many keen young (and not so young) eyes peered into our microscopes to discover life in another world. 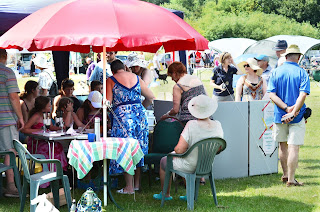 Our, slightly more mature audience, took a great interest in our wildlife photographs on display and perhaps most importantly, many of our visitors were amazed to hear about the fantastic wildlife reserve, that is right on their doorstop and promised to visit us, on one of our Open Sundays soon.

We even had a visit from the Mayor of Milton Keynes, Councillor Brian White, who was delighted with the work that FoHESC is achieving and urged us to continue building our Friends Group and encouraging the people of Milton Keynes, to enjoy their local nature reserve.

A great success, well done and thank you to everyone who helped on the day and supported us with equipment etc.

FoHESC have a stand at the Great Linford Eco-Fest, being held at the Marsh Drive Sports Ground. Please come along, say hello and find out about the fantastic nature reserve, right on your doorstep. We will have photographic displays, mini-bugs under the microscope and various competitions.

Following last years format we will have a dusk guided walk equipped with Bat Detector Boxes lead by Colin Savage. On last years walk we saw many bats swooping around the reserve (and our heads at times) including Britain's largest bat the Noctule.

We will then return to the centre after around 40 minutes to examine, with guidance from our Moth expert Gordon Redford, what we expect to be (if last year is anything to go by) an impressive array of moth species attracted to the light traps.
.
Free to Friends of HESC, guests welcome, £2 ea.

As part of our regular Open Sunday activities we are inviting our visitors to take part in the National Big Butterfly Count. At least 14 species of Butterfly have been recorded on the reserve during the last year, so please come along and join in and maybe, together, we can record some new species for the site.

There is also a good chance of spotting at least one or two of the ten species of Dragonfly that breed on the site.

Help and advice will be on hand during the day to help you identify the Butterflies and Dragonflies seen on the day.