Today's session can best be described as a mixture of frostbite and sunburn, with an icy start soon giving way to a warm and sunny day.

On the ringing front, we handled 59 birds with a nice mix of 18 species, 28 of which were newly ringed. Retraps may have outweighed the new birds this week but at this time of year, it is the retraps that provide the most valuable data, largely reflecting the migrants that have made it back to their breeding site after a long a perilous journey.

Unsurprisingly, this was a very warbler-centric day with seasonal firsts for willow warbler, sedge warbler, garden warbler, common whitethroat and our first ever adult lesser whitethroat. (Previously we have only caught 1st year birds.) In addition to these new arrivals were 15 blackcaps, 3 reed warblers and 3 cetti's warblers. Notable retraps included a returning blackcap which was ringed as an adult in 2019 and retrapped in each subsequent year, a male cetti's warbler which was ringed in 2020, and best of all, a sedge warbler which was ringed as a juvenile elsewhere in the UK in 2016, making it an impressive 6 years old! (The longevity record for sedge warbler currently stands at 8 years and 8 months).

Other birds of note included 5 reed buntings, one of which was a retrap from 2018, and 3 new greenfinches.

Today's star bird was a retrapped green woodpecker which was ringed way back in December 2015 and hadn't been encountered again until today. This bird is at least 8 years old which is impressive, but still some way short of beating the record of 15 years and 8 days! What was also unusual about this individual is that it had one mostly normal iris (whitish but with a few brown flecks), and one iris which was completely brown. Whether this is simply a sign of ageing, or perhaps some other condition, will require further study! 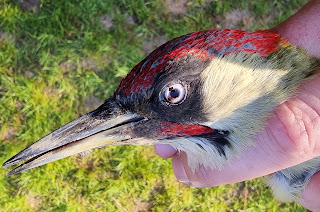 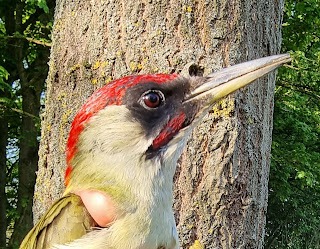 On the non-avian front we had peacock, brimstone and orange tip butterflies, 3 grass snakes, 2 great crested newts, and a common toad. A probably hairy dragonfly was briefly in a net, but freed itself before a 100% ID could be made.

Huge thanks to Keith, Richard, Helen and Otto for all their help and for quickly adapting to the hot and cold conditions!