Massive Tourist Visits LLNR - But Did You See It?

Following a tip off from a well informed member of the Friends Group (thanks Mark) I have done a little research on the interweb and have found the following post on the Roy Dennis Foundation Twitter Feed https://twitter.com/RoyDennisWF, which confirms  that a White-tailed Eagle did indeed roost at LLNR on the 2nd March 2021.

"Apart one brief return flight south to Northamptonshire (as described above), G318 remained in Lincolnshire until 27th February when it made a purposeful move to the south, passing to the east of Boston at 13:20 and then across the north side of Peterborough at 15:20. It eventually settled in woodland on the Cambridgeshire-Northants border having flown 107 km (67 miles) from the Lincolnshire Wolds. G318 continued to head slowly south over subsequent days, and spent a night at Linford Lakes on the outskirts of Milton Keynes, on 2nd March."

I am advised that it spent the night on Heron Island - which must have put the wind up a few Herons and Egrets and any wildfowl on and around the lake.

The bird which is one of those introduced on to the Isle of Wight is fitted with a GPS tracker and so it's movements and location can be very accurately monitored.

Unfortunately we don't have any pictures of the actual bird so I have posted below one of my own pictures of a WTE taken in Scotland a couple of years ago. I have been fortunate enough to see quite a few of these birds, at pretty close range, on my regular visits to Mull over the last 15 years and can confirm they are truly massive. 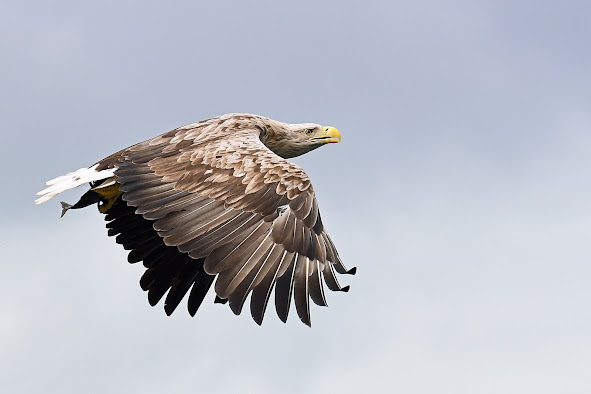